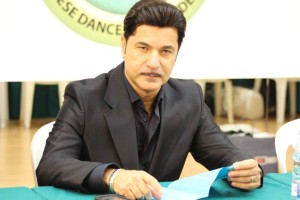 KHAGIC NICOLI TORKOMIAN Known as KHANITO is the Owner and President of Khanito Dance Academy, Honorary President of the Lebanese DanceSport Federation.
President of the Lebanese Artistic DanceSport Association.
President of the Lebanese Dance& DanceSport Council from 2003 till 2009.
He was born on the 14th of February 1960 in Beirut, Lebanon, with a long line of Armenian and Greek origin.
He started painting at a very young age, and this love he had for art carried him through all the stages of his life.
In 1974 he discovered his passion for music and studied Flamenco guitar.
Three years later he moved to France to further more his love of art and music.
There he learned all dance Disciplines and graduated in France in 1980.
In 1983 he made London his home for two year to expand his dancing skills into Tap, Jazz, Ballroom
and Latin.
He traveled to Italy, Germany, Greece and New York to broaden his dance expertise Then he came back to Lebanon
and worked on reviving dancing among all generations.
Now he has thirty six years of dancing and teaching experience spread over several countries like England,
Italy, Greece, Jordan, Cyprus, Dubai, Germany etc…
At his dance academy he teaches and prepares Instructors, Adjudicators, Competitors, and Show performers.